The beginning of the end? Last week was the first big “Bye Bye Plastic Bags” (BBPB) conference kicking off the “One Island – One Voice” Campaign. Initiated and co-organized by who?  Two sister, 12 and 14 years of age! Wow!!

Melati and the Governor of Bali

“We wanted to be significant, do something significant… like Gandhi”. Their goal: “No more plastic bags on Bali by the end of 2015.” 12 months, a food strike and endless hours of collecting signatures later, they have the support of the governor of Bali, the Secretary-General of the United Nations Ban Ki-moon, and plenty other organizations, local and international. For my research I followed their activities closely during the last year and here is what happened.

Getting bigger – the new campaign logo

There is a lot to say to understand how these two young girls have been able to made it so far. The empowering parents, their inspiring and famous international school (Green School), the power kids have when they take on responsibility for a better future. But they are definitely also two quite special and charismatic youngsters. Have a look at their first video

Melati, Isabel and their friends from BBPB in front of a shop which supports the campaign

To ban plastic bags on Bali by the end of 2015 they want to collect 1 Million signatures! This should then make the case for Bali Governor Mangku Pastika to put a ban on plastic bags. Almost weekly the kids are collecting signatures at markets and at the airport: 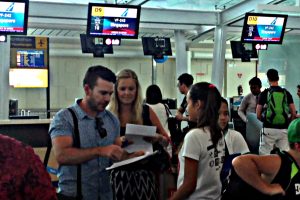 Collecting signature at the airport – one by one until one Million

Besides collecting signature on- and offline, they are working on a case study – a pilot village! The village head of a local community (Pererenan) invited BBPB to implement the no-plastic-bag agenda as an example for other villages on Bali.

In different socialization meetings the girls presented their plans and concern about plastic pollution. This was during a traditional meeting of all women of the village. The two sisters Melati and Isabel explained how they want to help conserve the environment: Using reusable bags, the baskets from former days or banana leaf wrapping can all help to reduce the increasing plastic bag waste visible everywhere.

A present from BBPB to the village women – Baskets 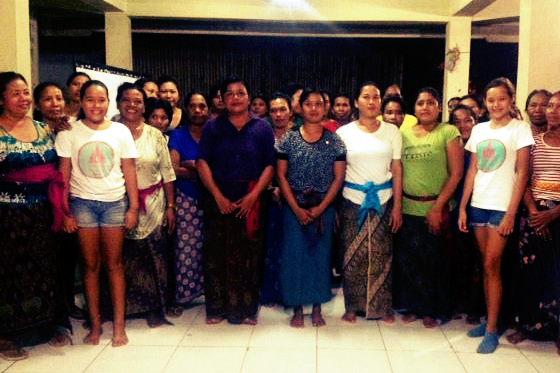 At the socialization event: the girls and the women 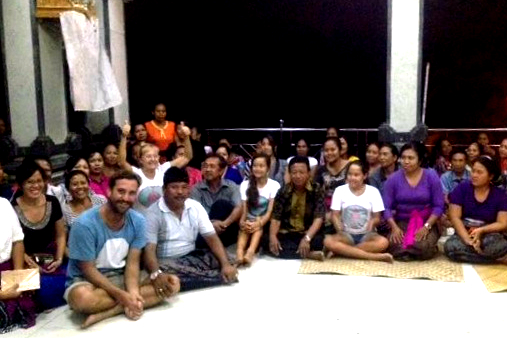 Participant observation: research at the socialization event. You find me next to the village head 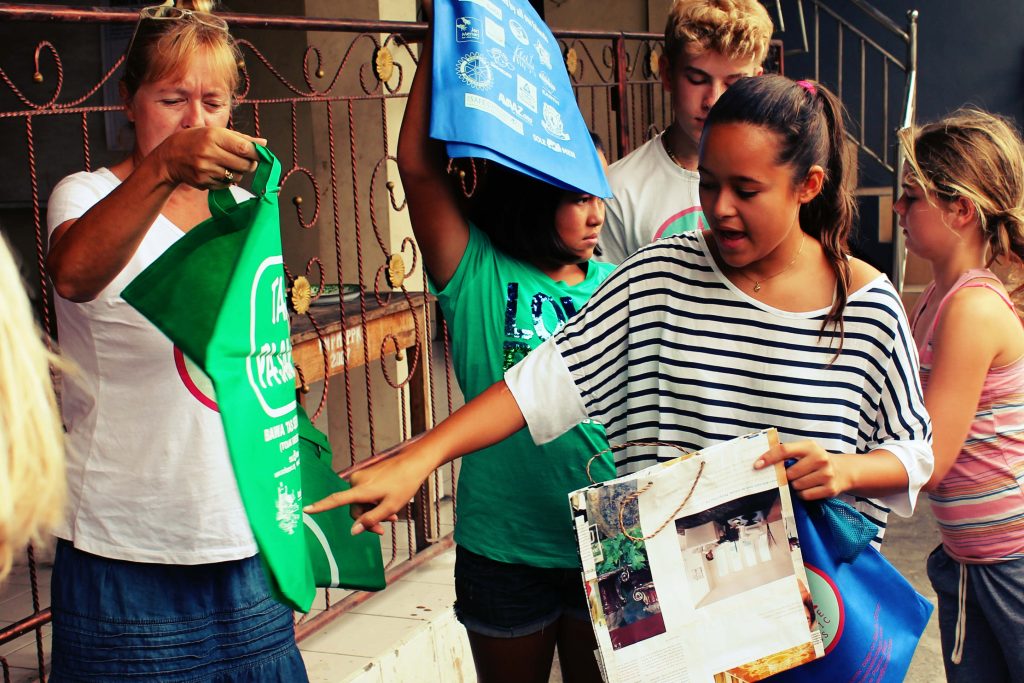 Melati explains to the others what to do in the village

Kites are huge in Bali. In size and meaning to the people. One of BBPB activities was to join that tradition and build a BBPB kite. 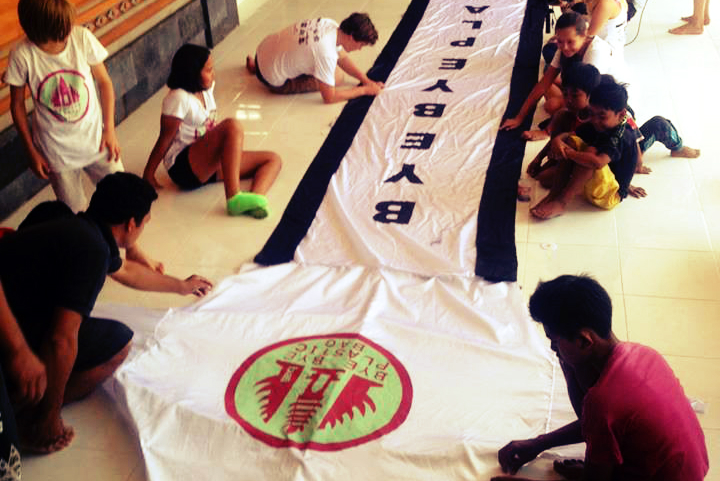 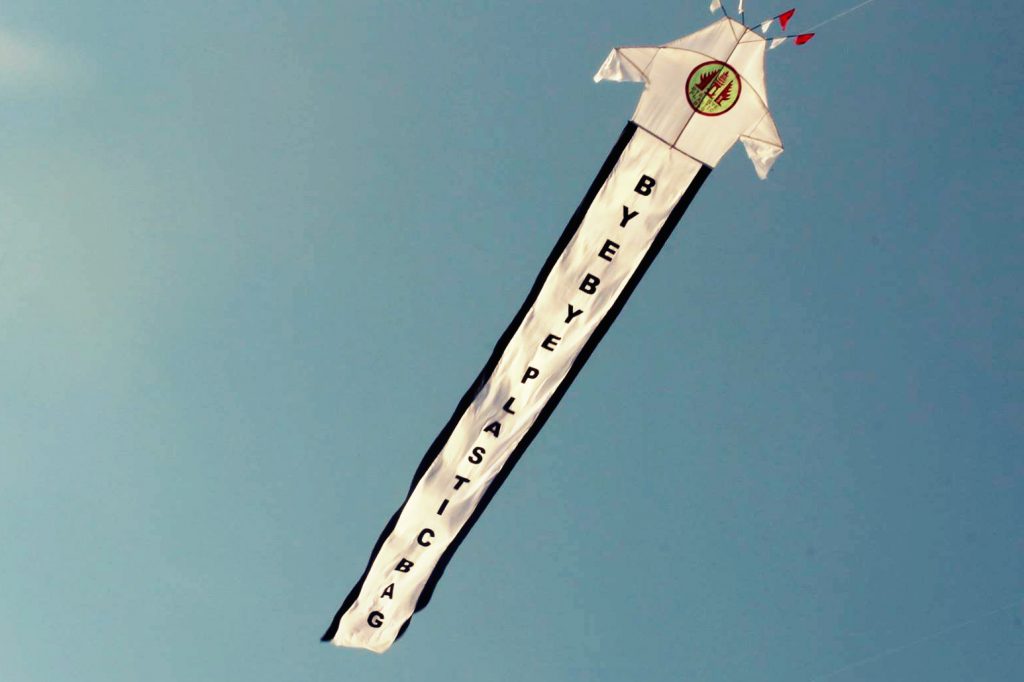 At the end of last year, the signature count was at 65 000. It is a lot, but still far from one Million. The kids were getting impatient. They did not want to wait another couple of years; the environment could not wait another couple of years. Coming back from the INK talk in India they were even more inspired. After visiting the former house of their role model Gandhi, they decided to go on a food strike to make their point.

I remember well the meeting when they presented this idea. I was worried they were taking it too far. They explained that their “Food-” not “Hunger Strike” was about not eating during daylight. Before sunrise, and after sunset it was OK. Drinking was OK during the whole day. They felt strong about it, and soon after started. It only took a couple of days until their goal – meeting the governor of Bali – had come true.

Pushing the plastic bag ban: Melati, Isabel… and the Governor of Bali!

The governor could not commit to ban plastic bags. The legislative institutional setting apparently does not allow him to make such a law. But he did sign a “Memorandum of Understanding” in which he expresses his strong support for the initiative. To show that he was serious, he allowed the kids from then on forward to use of the official Governor Logo for promoting their goals of reducing plastic bag use.

That was a big day for BBPB. With the support of the governor of Bali and only two weeks later they invited everyone who wanted to join against the plastic bag plague. More than 60 institutions came and declared that they want to work together with ByeByePlasticBags! Last week then, the “One Voice –One Island” Campaign started at a big kick-off conference.  Together with a friend we lead the workshop on “Policies”. Government officials, representatives of other environmental campaigns, Green school students, representatives of the Rotary Club were among the participants.

at the conference: the workshop on policies, with officials from the Bali government 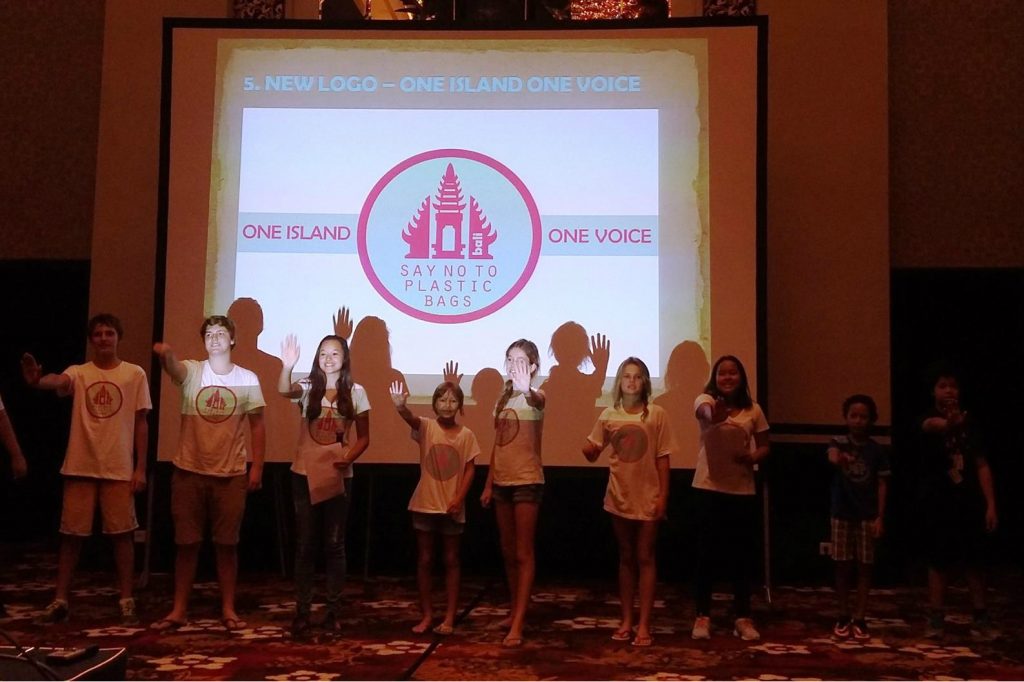 Making their point: NO! to plastic bags

It will not be a short process; a “plastic bag ban policy” will have to evolve from a complex legal system.  Which Ministry/Department on which legal level (national, district, regional) has the right and power to do so? Once that path is sorted, the campaigners know which way to go.

So how does the BBPB campaign connect to my PhD research? Part one of my research is about finding out what works best in motivating people to use less plastic bags.  See my next post “Morals, Money or the Master – what motivates people?” Part two of my research is about qualitative research. That means talking to people, making interviews, observe, trying to learn from the people how they perceive the environment. Do they feel like there are problems? Is there – in their eyes – pollution? What do they think are the reasons? What can be done? Why are plastic bags so popular? What could change the habit?

Especially the last question is at the heart of what Isabel and Melati and the BBPB team want to know and make happen. For me it is very interesting to see how their approach works and whether this is a strategy that only works in Bali, other parts of Indonesia as well or maybe even beyond? So far they achieved a lot by raising awareness to the problem and getting the Governor to sign the MoU. In the pilot village more and more reusable bags can be spotted, but many people still use plastic bags. Nearly every Saturday the girls and other kids go to the village and pass by the stores to remind the owners to help to reduce the plastic bags, and provide them with reusable bags.

Conducting surveys in the village together with BBPB

Most of the kids supporting the initiative have an international background. Either both parents are Expatriates, or one parent is. To them Bali is their home. Melati and Isabel were born and raised in Bali, their Mom is from the Netherlands, their Dad is Indonesian. It is great and promising that more and more of the Indonesian kids are currently getting involved in BBPB. As this cultural gap grows further together, the campaign is likely to become even stronger. What before has spread through media and the international public on the island eventually reaches out to all Balinese villages, also the many far away from tourism and the expatriate scene. The next activity of BBPB? A big march through the villages of Bali! Sounds like a plan to me.